Posted on
April 10, 2021
by
Town Hall
MDC’S LAKE MCDONOUGH BOAT LAUNCH TO OPEN APRIL 10 New season passes will be available along with registration forms
April 7, 2021
For Immediate Release
(HARTFORD, CT) – The Metropolitan District (MDC) announced today that it will open the boat launch at Lake McDonough on Saturday, April 10 for opening day of fishing season. Lake McDonough is a recreation area located off Route 219 in Barkhamsted that permits the launching of personal boats.
In an effort to continue to safely manage operations during the COVID-19 pandemic that began last year, Lake McDonough will open on a limited schedule of Saturdays and Sundays only for the remainder of April. The boat launch will open daily, beginning May 1.
The boat launch will operate with the following protocols:
• No cash will be accepted – check or credit card only
• Boaters must complete a registration form
• The hours for opening weekend (April 10 & 11) are 6AM-8PM
• Regular hours are 10AM-8PM
• No new launches after 6:00PM and all boats shall be docked by 7:30PM
• Boaters may launch private boats only – there are no MDC boat rentals
• No fishing tournaments and associated activities will be permitted
• No commercial boat rentals are allowed
For 2021, the MDC has adopted a new fee schedule for boat launches. The cost of a one-day pass will be $20 per boat for residents and $40 for non-residents. There is also an option for a season pass that will be $60 for residents and $120 for non-residents.
Residents are defined as someone who is a resident of the MDC’s Member Towns, Non-Member Towns or Watershed Towns: Bloomfield, East Hartford, Hartford, Newington, Rocky Hill, West Hartford, Wethersfield, Windsor, East Granby, Farmington, Glastonbury, South Windsor, Barkhamsted, Colebrook, Hartland and New Hartford.
In addition, there will be a new permit and agreement form that boaters will need to fill out when using Lake McDonough. The form (as well as the facility rules and regulations) will be available online on the MDC’s Lake McDonough webpage: https://themdc.org/recreation-areas/lake-mcdonough. Copies will also be available on site. Residents must have their motor vehicle and vessel registered in the same town.
About MDC: The MDC is a nonprofit municipal corporation chartered by the Connecticut General Assembly in 1929. The MDC provides water, wastewater treatment and other services to its member towns: Bloomfield, East Hartford, Hartford, Newington, Rocky Hill, West Hartford, Wethersfield and Windsor. In addition, the District supplies treated water to portions of Glastonbury, South Windsor, Farmington, East Granby and Portland. 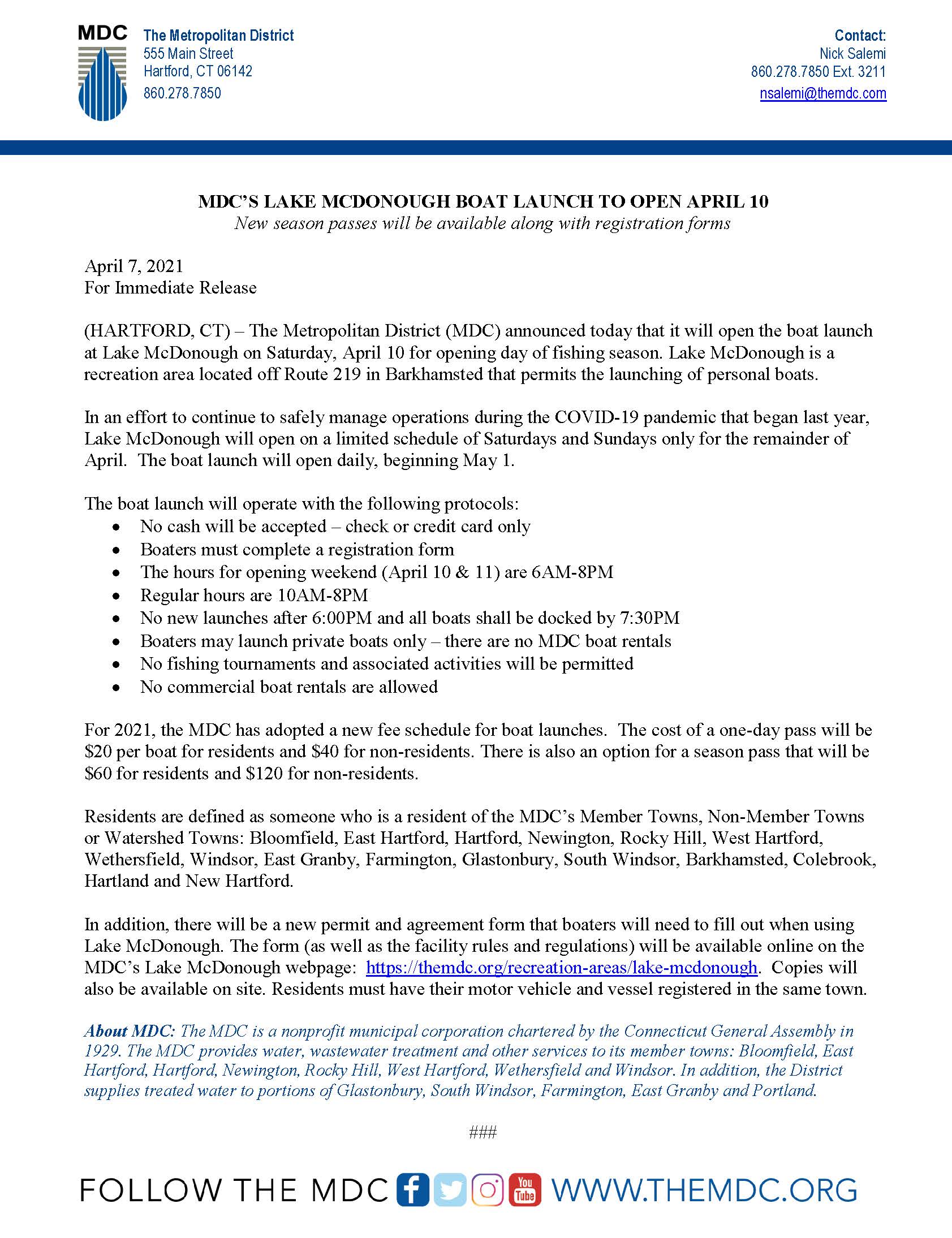